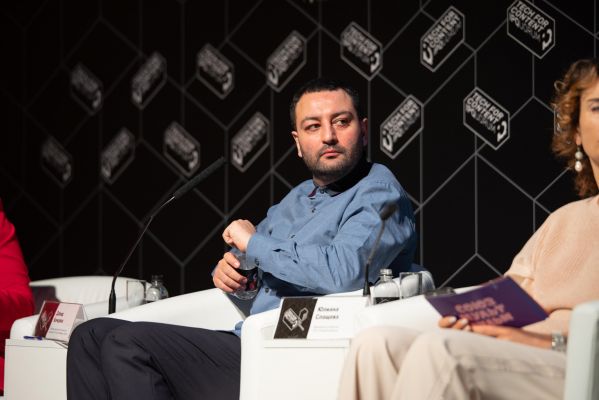 On April 26, Advisor to the Deputy General Director of Gazprom-Media Holding, David Kocharov, spoke at the plenary session "Suppliers of Happiness, or the Economy of emotions", which opened the International Forum of Creative Leaders IPQuorum 2021: Tech for Content. The Forum is held in the Technopark of the Skolkovo Innovation Center. The session was moderated by Russian TV presenter, journalist and public figure, producer, actress Yana Churikova.

David Kocharov joined Gazprom-Media in April this year from the online cinema IVI, where he served as general producer. In addition, during his career, he founded the production studio Goose Goose Films, which produces series and prime-time shows for the STS and Rossiya TV channels.

According to David Kocharov, the digital content market is being formed anew: "Online platforms are entering the rank and status of media players-content producers, and therefore the online media market continues to transform. The future belongs to originals, which makes its own marketing and sells itself. The platforms have many external competitors – video hosting sites, blogs, and TV channels that compete for the attention of viewers. The advantage of Gazprom-Media Holding's online services is that our company is able to create the best premium content and count money correctly."

In April of this year, the largest Russian video platform RUTUBE was relaunched: "The platform has introduced a new system of recommendations, there will be less advertising, the volume of which was a barrier to the influx of users, and its own content and educational programs will be published. In addition, we plan to attract leading Russian video bloggers to jointly create unique content», David pointed out.

David Kocharov added that contrary to popular opinion, there is no trend in the media market to reduce the timing of content: "People are ready to watch long films. TV earns ratings by showing blockbusters, and today users are willing to pay for world premieres on platforms as well. Millions of people around the world are now watching the new "Justice League," which runs for four hours."

At the end of his speech, David Kocharov named three trends that, in his opinion, will be relevant from the point of view of investing in content of their own production: "First – it is risky, but it is most profitable to invest in blockbusters, in big and loud stories, because the future is for big movies. Second, we need to increase the amount of content that will bring different generations to the screen - I mean the so-called family content. And the third trend is all sorts of bold experiments. They can be technological, format or story-based, because modern life itself presents us with many new challenges. From the point of view of development and economy, it is dangerous and unprofitable to live in the old formats."

The moderator of the session, Yana Churikova, noted that the creative industries needed such a hybrid format of intersectoral communication as IPQuorum. According to her, you can invest in content indefinitely, but in any case, there is a question of monetization.

Olga Piven, CEO of RTVI TV channel, stressed that experts predict a drop in the audience of linear television by 2025, so the channels are actively experimenting with content in digital format.

The chairman of the Board of the Association of Animated Films, the chairman of the Board of the film studio "Soyuzmultfilm", the general director of the Film Studio named after M. Gorky, Yuliana Slashcheva, noted that there is already a generation of parents who did not grow up on the classic works of "Soyuzmultfilm", so we decided to update the legendary content – for example, we released the TV series "Prostokvashino", thus restarting the franchise.

Mark Zavadsky, Managing director of the Riki group and creator of Smeshariki, stressed that the most effective way to monetize animated content is to work with several projects at once, hoping that one or more of them will be able to "shoot" and achieve high commercialization.

Ekaterina Cherkeszade, Director of the University of Creative Industries at Universal University, said that every year a study of the entertainment industry is conducted to understand what knowledge and skills a graduate should have, in which it is necessary to develop flexible competencies.

In total, over 60 sessions, discussions and master classes will be held at IPQuorum over the course of two days. All workshops will be free of charge and will be held on a special IPQlab platform.

The Forum is organized by the Ministry of Culture of the Russian Federation, the Skolkovo Foundation, and the IPChain Association. Co-organizers and partners of the Forum are the Federation of Intellectual Property (FIS), the Eurasian Confederation of Copyright Holders ' Societies (EACOP), the World Intellectual Property Organization (WIPO), the Scientific and Educational Center for Intellectual Property and Digital Economy Digital IP. The Forum's communication partner is the integrated communication solutions agency Prophet. The official partner of the Forum is Gazprom – Media Holding. The partner of the evening event is the First Music Event.

The Skolkovo Foundation is a non-profit organization established in 2010 and acting as the management company of the Skolkovo Innovation Center. The purpose of the Foundation is to support technological entrepreneurship in Russia and commercialize the results of research activities.

The IPChain Association was established in 2017 by the Skolkovo Foundation, the All-Russian Intellectual Property Organization (WIPO), the Higher School of Economics (HSE), the Russian Union of Copyright Holders (RSP), the St. Petersburg National Research University of Information Technologies, Mechanics and Optics (ITMO), the Russian Copyright Society (RAO), the Association of Copyright Holders for the Protection and Management of Copyrights in the Field of Art (RUIS), and the New Century Bank.

The main goal of the IPChain Association is to form standards, technologies and tools for interaction between intellectual property rights market participants in the digital environment.

IPQuorum  –  a communication brand-was created by the IPChain Association and the Eurasian Confederation of Copyright Holders ' Societies in order to organize permanent international communication platforms for dialogue with the world community on the development of intellectual property in the digital economy.

Under the IPQuorum brand, a series of events are held annually in Russia and abroad, a complex of exhibitions, conferences, discussions, presentations and business sessions, designed to become a driver of qualitative changes in the global intellectual property market, the development of the fields of fine (beaux-arts) and industrial arts (arts industriels) as full-fledged subjects of the digital economy.

The work of all IPQuorum communication platforms is aimed at finding applied infrastructure and system-forming solutions for innovative development of the intellectual property sphere.